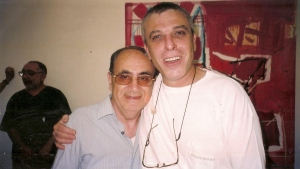 My dear friend and partner in our practice, for the last 50 years,  Dr. Gershon Itzhak, GERI, passed away on Tuesday night 7.8.2012,  In his own bed at home, after 5 months of senseless but brave battle with Pancreatic Cancer. We buried him Thursday night, as the sun was setting in the horizon. He now Rests In Peace, where he yearned to be for the last week: “In the place of peace, calm and quiet…” (His very own words 2 days before he died), and I already miss him. 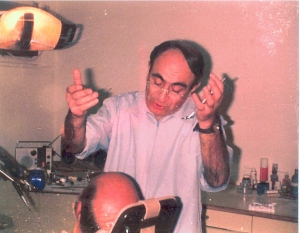 He was brave, the bravest man I knew, facing this terrible illness. An illness violent but not swift enough, for the merciful death he deserved, cause he was one of the deserved, of whom we read from time to time and of whom we say why him? Why like that? He deserved better maybe in 20 years time, but not now!  Certainly not like that. He himself said to me faintly one night, “Not like that, not like THAT!!” 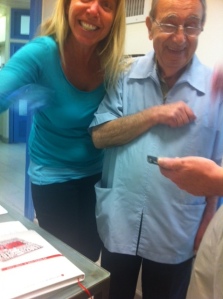 For over 3 months into his illness he would come to work as usual every day, work takes the pain off my mind he said (and it did!), he even managed to “squeeze in” a short visit abroad that was planned ahead of the diagnosis, The oncologist, urged him to go as long as he felt reasonably well and when he came back he was full of joy and pride telling me all about the grand visit to Miami.

Two days before his death we had our last “instruction talk” , re raising all the instructions he left with me during the last 2 months regarding his own patients mainly with “attitude” instructions, a revisit, to sum up his wishes, he told me he trusted me to know what to do and when… (not professionally but rather “behavior” wise) he said Thank you, told me to: “GO, GO, GO” and softly closed his eyes as if to say no more talking…let me rest now. The day after he passed away, I already miss him but his Soul will be bundled in My Life forever.

We humans are a selfish bread, me included. His daughter Tami thanked me just before the funeral (again) for all that “I did for her father”, Maybe I did it for him but between us, mainly for myself, for how could I live with the thought that I left him “wounded in the battle field” without trying to help. All that, was futile from the very beginning (we both knew) but still I tried to support him, give him a few moments of light in the darkness he was in, see a smile on his face, catch a hint of his cunning sense of humor, watch him make one step achieved without support “I am independent now”, he said to me playing around making 360º turns on the wheelchair, Basically, between us I failed I’m not sure I made any difference. Dentists like us, (unlike general or specialty medical Doctors), are used to be able to give most of our patients, almost instant relief from pain after the initial first visit, He used to say on medical doctors :”if you have the flu and go to your doctor it goes away after 7 days otherwise it goes away after a week!” (No offence intended).

He was my second pair of hands and eyes and I was his, at 76 he still performed like a young man, as my father before him (who stopped working at the age of 81). They both looked so young when working doing the thing they liked most, solid high quality dentistry full of integrity and empathy towards their patients.

He was a real classical music specialist, “Bach is the greatest” he used to say, he knew hundreds of music pieces by heart recognizing most of them by name and composer sometimes even conductor, after 3-5 notes (how he loved those Thursday 2pm quizzes on the radio), he also liked Louis Armstrong especially “What a wonderful world” which he would put twice, in full volume! (he was a quiet guy not the full volume type) but this, the Finale of each week was played aloud to mark the end of the week and then he would go… (until the new beginning on each Sunday morning, Year in and year out).

With his eternal collection of pipes he always chose the best tobacco mixtures and at times mixed several different blends to fit his taste which he kept in a small nylon bag in his pocket, taking occasional puffs in-between patients in his “smoking corner” by the coffee machine. (I really miss his figure sitting humbly in his corner sipping his coffee and puffing his pipe). His coffee was a special blend freshly milled and usually served at a certain time each day.

He was not a Foodie nor a wine connoisseur, in fact he did not appreciate Haute cuisine or “fancy food” he liked simplicity, yet he had good taste. From the foods he did like, he could spot quality against poor imitations; his favorite food was Mediterranean, Balkan food. He was born in Sophia Bulgaria, He loved Hummus always delighted when we had some Abu Hassan Hummus 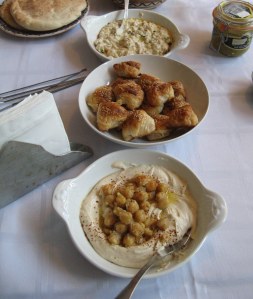 (considered one of the best around),brought over fresh from Jaffa, for this, he would take a break and have half a pita full, he was a moderate eater, small amounts were enough for him. He loved his mothers special recipe Bean soup, “It is really good sit down and have some soup first” he used to tell me when I would pop in for a visit at theirs, of course, Börek with Cheese or cheese and spinach Burek. (He knew a good artisan one from just cheap “industrial” fakes!). As a matter of fact, in trying to cheer him up I made him a Cheese and spinach Burek using the best available Bulgarian cheese (Sirene/ Sirenje) with the finest butter base puff pastry in the hope that the idea would give him some appetite and joy but alas it was hard for him to eat anything not just my final food offering to him. All in all, he had more dislikes than LIKES, that was the man, no way, you could move him astray from is long well known path and order.

Bulgarian cuisine is one of the pillars of the South Slavic / Balkan cuisine. It is diverse, due to the relatively warm climate that allows excellent growth conditions for a variety of vegetables, herbs and fruits, you will not find in more northern parts of Europe. It is famous for rich salads, an every meal must, and quality dairy products especially Yoghurts and salted brine fresh cheese Sirene/ Sirenje , It is made of goat milk, sheep milk, cow’s milk or a combination of milks. It is slightly crumbly with a solid fat content of about 30-35%. It is commonly produced in blocks (We prefered the sheep milk kind), it is very much like a good Greek Feta, or similar cheeses from Albania or Macedonia. 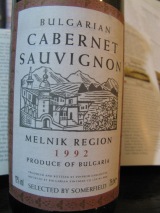 He was not a wine connoisseur but liked wine with his meals especially Red Cabernet Sauvignon, local wine will do, he did not like extravagance but allowed me my follies. From time to time when he got a good red Bulgarian wine he would give it to me to taste “the universal truth”… that the Bulgarian wines are one of the best wines in the world, after all back in the 50’s they used to be the second largest exporter of bottled wine in the world, second only to France. (now Italy overtook the crown from both countries with production of 4.96 billion litres of wine compared to 4.62 billion in France)

Traditionally Bulgarians are known for the production of high quality yoghurt, which he loved so much and towards the end it was the only food that comforted him. They use a unique local variety of micro-organism called Lactobacillus bulgaricus in the yoghurt manufacturing process. Bulgaria is part of a world region that has cultivated and consumed yoghurt from as far back as 3000 BC.

Ayran – a drink made out of yogurt water and salt, a hot summer weather refreshing health drink. 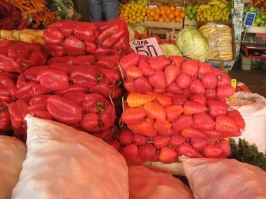 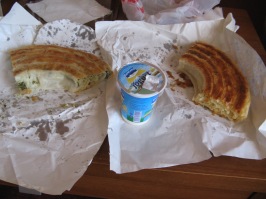 Banitsa – is a traditional Bulgarian filled pastry prepared by layering a mixture of whisked eggs and pieces of cheese between filo pastry and then baking it in an oven. Banitsa is usually served with plain yogurt, ayran, or boza. It can be eaten hot or cold. Some varieties include banitsa with spinach (spanachena banitsa) his favorite,

Byurek, is the Bulgarian version of the pastry dish, a variation of banitsa. Bulgarian byurek is a type of banitsa with sirene cheese with eggs added and sometimes spinach.

These are the dishes he loved most…

His kind, loving, calm and humble spirit will be with us ALWAYS

Finally, a “piece of me” in the form of some lines from the eternal Jeferson Airplane song “Stairway To Heaven” where he is heading. These feel as a most appropriate farewell words from me: