Yo’ezer Wine Bar / Bistro,  is without a doubt the Best wine bar / bistro in Israel.  This is a posh little place, wine and food wise, But lately on Mondays ONLY they have a weekly occasion at the restaurant, they call it: Bloody Monday, when they serve amongst other Monday specials, a YBurger;  Yoezer own version of the famous and infamous American Burger. It comes Yoezer style: chopped or roughly minced entrecote of beef with beef bone marrow (the marrow is scooped out of the bones, than frozen, cut into cubes and mixed in its frozen state, with the minced meat to make the basic Patties. 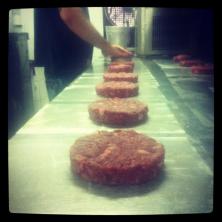 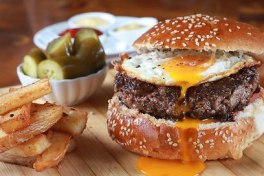 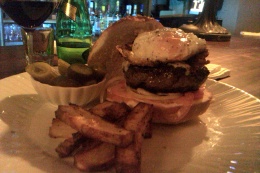 For those who like Great Burgers American style, this is as close as you can get to the best of the best (maybe better) no sauces BBQ or Worcestershire sauce are added to the meat mixture Just Meat, Marrow, salt and pepper (I think) and being a once a week novelty everyone is flocking to get a bite, so do I.

Entering the “cave” I see Shaul Evron the owner sitting on the left side of the Bar (his usual place) beside him, Chef Rafi Cohen (one of the 5 best chefs in Israel & owner of “Rafael” Restaurant in Tel-Aviv)…:”Hey what are you doing here? I’ve come for a Burger… imagine, so did I and 10 minutes later, Chef Jonathan Roshfeld (yet another top chef from the same top 5 list) tapping on my shoulder to say hallo he’s here also for the Burger… in fact the place is packed with diners and culinary personalities all here for the YBurger. Now most of these people have dined in the last 20-25 years with the best chefs of France some of them worked in 3 star Michelin Restaurants and they saw it all from High to Haute cuisine still they flock for THE YBURGER (isn’t that something?). So why are they flocking? What is the alluring magic that pulls people in magic strings  to eat Hamburgers? I don’t know the answer there must be more than one… I’m sure you know how sometimes you just feel like a sandwich. Well not just A sandwich but one that has it all, and it tastes so delicious you start thinking, no wonder people around the globe of all different races like it so much (It comes in slightly different forms from place to place but basically it’s all the same). According to Author Linda

Stradley who wrote: History and Legends of hamburgers, started ages ago during the times of – Temugin – Genghis Khan (1167-1227),  http://whatscookingamerica.net/History/HamburgerHistory.htm check it out it is quite fascinating.

Here at Yoezer you can have it Complete (egg bacon and cheese) or with whichever topping you prefer of course with great Dijon mustard and ketchup in separate dishes (spice it as you like) pickles and chips. The Y is a real Bliss, simply delightful!  We wash it down with Givry 1er Cru Clos de la Servoisine Rouge 2002 Domaine Joblot, which was the proper wine for a super burger not a grand Bourgogne but had all the qualities of freshness and fruit to accompany our Munch. We moved on to the more serious Gevrey Chambartin cuvee’ vielles vignes 1999 Domaine Esmonin Sylvie, this is a more serious wine which started with all the expected earthy aromas of a good Côte de Nuits, rich fruit flavors with rounded but present tannins well balanced with the fruit Perfect.

Being one of THE best restaurants “around” and my favorite Bistro, Yoezer was a one man’s dream that came true, the man is Shaul Evron. He is a culinary sage and is considered by many as the Hight Priest of Israeli culinaria.

When Shaul opened his first restaurant in Nave Tzedek on the border between Tel-Aviv and Jaffa (1970’s) very few even knew what is a good juicy steak is and how to prepare it shame on us 45 years ago!!! I guess the problem was availability of ingredients, treatment of cattle and meat, and ill effects of religious beliefs and practices:

“Only be sure that thou eat not the blood: for the blood is the life; and thou mayest not eat the life with the flesh”. The Book of Deuteronomy  Chapter 12, 20-23 and there goes your juicy “bloody” steak!

Between us this is quite a nice proposition if read on its own but in the next verse, Verse 21, reads : 21 “If the place which the LORD thy God hath chosen to put his name there be too far from thee, then thou shalt kill of thy herd and of thy flock, which the LORD hath given thee, as I have commanded thee, and thou shalt eat in thy gates whatsoever thy soul lusteth after.”

It is possible that people that do not abide by the “laws” of religion are simply in a higher spiritual state???

I do not look at Shaul as a priest or an oracle but rather as a friend, with a great taste, A great taste in food, in fact a lover of good food, one of the few who can find a woman’s voluptuousness in food, he loves for instance oysters, He’s a great lover of both rustic and fine French cuisine, Bourgogne cuisine and wines in particular. For all of these he opened 17 years ago his “baby”  Yoezer.

He’s a conservative Pinot Noir Chardonnay kind of guy, he loves wine dungeons and bars, he’s a lonely guy with thousands of friends, a lonely wolf at the head of a wine guzzling pack. He says that I am a wine necrophiliac and I say he, is a wine pedophile. He loves them young, or can’t resist his urge to taste a wine even when it is too young to enjoy (for me) and claims I like wine corps (too old). But through the years we’ve managed to prove each other wrong on many occasions…

The menu at Yoezer is Basically meat orientated, that’s the owner’s favorite food product it comes in all forms and excels in all: 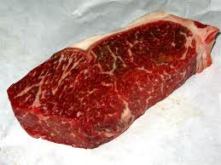 Raw Meat:  as in the Steak Tartar or Américain, both on the menu. Américain is the  Belgium version of steak tartar served with fries. It is known as “filet américain” – American fillet with onions and more seasoning than a normal steak tartar. Trust me, it is much better here than anywhere in Belgium! I guess Shaul Likes it and the kitchen here cooks for him, his taste, his dreams… The kitchen stuff holds his culinary views and understanding  in such reverence and anxiety NOT FEAR, that they cook to please him personally with each dish that comes out of the kitchen, and we the diners are benefited by getting almost always the best according to Shaul, what more can one expect from a meal? Did I forget the Carpaccio??? The name of a typical dish from the Alba region in Piedmont “La carne all’albese” it is named carpaccio after the 15th-century Italian painter Vittore Carpaccio and first served under this name in 1950 at Harry’s Bar Venice. Yoezer make the carpaccio from entrecote heart (rib-eye) 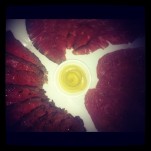 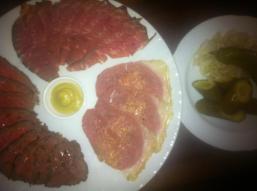 Smoked, Cured, Boiled and Stewed Meats: from smoked meats and poultry to the best Pastrami in town Corned Beef  and Weissbraten cooked in clarified butter and injected with butter occasionally, to the French style luscious confit de canard, or  Porchetta which is a fatty boneless pork roast (fat and skin rolled over) Italian Style. Porchetta is usually heavily salted in addition to being stuffed with herbs rosemary, garlic, thyme oregano etc. Smoked sausage with warm Sauerkraut “sour cabbage”, Jambon de Paris Comme il Faut!! And Bulls tail stew to name but a few on this section… They used to make here great homemade Boudin Noir (blood sausage) and Pied de Cochon these are off the menu due to lack in demand they are great but do not conform to the Israeli taste (unfortunately)… 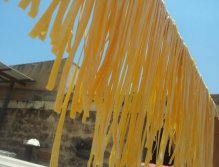 Pasta and Pastry : the most distinguished dishes in this section are the “infamous” 40 egg yolks Homemade pasta cut in different styles as Fettuccine or pappardelle with a variety of meat based sauces or just truffles… and of course the double amazing truffle in puff pastry (yes one whole truffle), on the most delicious thickened almost toffee like beef stock with truffle’s oil Sublime!!! 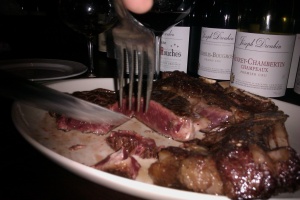 Fried and Grilled meats:  You have your basic Steaks from the best cuts available from the local beef, made to perfection around rare to medium rear depending on the cut. A giant côte de boeuf always served with lightly fried crispy greens and potatoes.

Now beef in Israel is not the best in the world… compared with Italy’s Bistecca alla fiorentina from the Toscana’s Chianina breed of cattle, France, or England/Scotland with such as Aberdeen-Angus, bred in Scotland, and often called doddies, Galloway, from Scotland,  Shorthorn, an English breed of cattle. and Montana beef in the USA why Montana? I don’t know I just have this memory stuck in my mind as I exited the Billings, Montana airport heading toward  Yellowstone Park a Huge Road sign Welcome to Montana EAT BEEF! Greeted me and got stuck in my mind…This is cowboy country and I Love Wild West cowboy’s myths and legends, and the way they make use of beef meat in the open fire rolling on a spit. 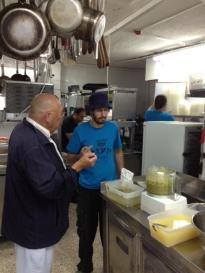 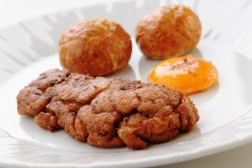 From the present menu my favorite dish by far and in danger of extinction (again not enough people order it), is the Milk Calf’s Liver on a bed of fresh corn and dried Porcini mushrooms polenta topped with fried fresh porcinis (Ceps more likely) This dish is so well balanced with a slight sweetness that compliment the liver with the aroma of fresh porcini delicately flavoring the dish. PERFECT!!  and the butter fried calf’s brain or sweetbreads served with an egg-yolk and rounded Pretzel buns . My  Thanks to the young, innovative, shy and extremely talented chef BEN TIDHAR.

Oh the wines we had through the years while dining at yoezer are special and plentiful. There were downs as well as ups but the ups are on the winning side for me, for I can enjoy a near perfect wine if all around is perfect: food, company, spirit and atmosphere, Shaul is different if the wine is not totally amazing a new bottle has to be opened immediately, lately he is mellowing down this attitude to a more sensible approach still it is an admirable quality.

We had so many mainly Bourgogne’s and Champagnes but also some great Bordeaux’s. But the occasion is always more important  than the list.

Our memorable wines together are numerous but some that come to mind are without a doubt from the “Necrophilia” to me the most memorable and the last bottle of the case is without a doubt the near perfect Chambolle-Musigny 1er Cru Les Amoureuses Domaine G. Roumier 1982.