A story of a DARE

It is not often that a GREAT chef DARES me to sample his new menu at his Restaurant. Well… one of the most talented chefs in Israel Meir Adoni of CATIT Restaurant in Tel-Aviv, did just that! He dared me to put his “cooking creations” to “contest” against any other meals I had with renowned chefs around the world. (2-3 Michelin star restaurants) and he knows the restaurants I visited lately.
For me it was a win win situation. The deal was give me 5 hours of your time and Just 60% of the cost of a GREAT meal abroad, (wines not included) for me and one or two other experienced diners of my choice. We bring the wines, (we’re good at that…), and come with open minds, allow ourselves to immerse unconditionally into his world. Between us I could not have been Happier
Now, I know this young, talented guy, Meir ADONI, (almost since he first opened his first restaurant outside Tel-Aviv in Kfar Ruth and later in the astonishing Allenby Farm House at Kibbutz Netzer Sireni, what a great venue! (unfortunately for him not at the center of things). That day I dined at his place with amazement he was an eager youngling, with lots of ideas circling in his culinary mind, at times overdoing content and dish size, but the talent and sparkle was there from day one, we all mature to excellence, the hard way… 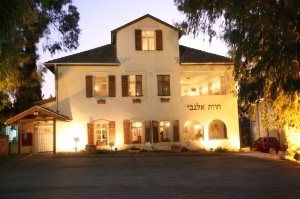 The man who cooked at the house where the british headquarters and personal residence of General Edmund Henry Allenby, the British General and administrator, Alenby, who led the Egyptian Expeditionary Force during the Sinai and Palestine Campaign in the British conquest of Palestine and Syria in 1917 and 1918, during the First World War, The man who “freed” Jerusalem from 400 years of Ottoman rule, a great friend and commander of T. E. Lawrence (“Lawrence of Arabia” one of my favorite characters). As Lawrence wrote in his book seven pillars of wisdom, an autobiographical account of his experiences of British soldier:
I loved you, so I drew these tides of men into my hands
And wrote my will across the sky and stars
To earn you freedom, the seven pillared worthy house,
That your eyes might be shining for me when I came
So does Meir Adoni who started cooking at General Alenby’s headquarters, preparing his tour de (culinary) force, his very own seven pillars of culinary wisdom, for me personally I must say I was flattered.
To sum it up we did get a virtuoso culinary experience on the day the first Palestinian Rockets fell on Tel-Aviv (9/11/12), a meal that allowed us to forget all the worldly follies of human deeds such as war, death and destruction and allowed us 5 hours of calm bliss with a rare combination of our 5 senses, mainly smell and taste, in balanced aroma’s, visually exquisite artistic presentation to touch the realm of all our senses in each and every dish from start to finish. It certainly was an impressive expression of Chef Adoni’s passion, to food and culinary excellence.
The wines we brought :
Pierre Gimonnet, Fleuron 1996 1er Cru Champagne
Sauvignon Blanc (Morillon) – Zieregg – Manfred Tement Austria

The Meal:
The champagne Pierre Gimonnet, Fleuron 1996, was opened all dressed in a lovely straw yellow colour, leaning towards gold with nice stream of elegant delicate bubbles, this maturing excellent wine is full of notes of a mature champagne aromas of compote of apricots and golden apples, with a touch of roasted almonds and a nice tone of yeast bouquet (the alluring side of a great champagne), still refreshing with a good balance between fruit and acidity, it turned out to be a most suitable wine for the meal that lies ahead… 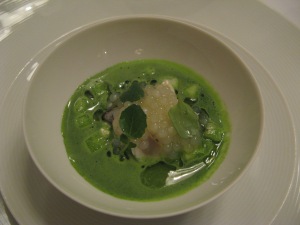 1. Gillardeau oyster.
Grean Apples, celery, cuecumbers, Tapioca pearles Jus of parsly and Youzo
One fresh oyster laid gently in a jus of parsley and Youzo with small cubes of green crunchy vegetables and fruit, the scent of greens balance by the acidity of the Youzo compliment the fresh oyster (with its juices) and a decoration of Tapioca pearls, a dish fit as a start to a regal meal.
Gillardeau oysters are a brand of edible oysters that are produced by the Gillardeau family founded in 1898 in Bourcefranc-le-Chapus near La Rochelle and the Île d’Oléron in western France
Tapioca is a starch extracted from cassava. This species is native to Brazil. The term “tapioca” is used to represent the root of the cassava

plant, rather than the starch
The pearls must be soaked well before cooking, to rehydrate them; they will easily absorb water equal to twice their volume, becoming leathery and swollen.

2. Triptych of seafood
An eggshell filled with Blue Crab flesh, spinach, white almonds, quails yolk and shrimp butter, “Cromesquis” of Langoustine Bisque, Toasted brioche with shrimp butter.
This is a triptych of delightful bites of seafood first the content of the eggshell delicate comes to life upon crunching on a bleached Almond every once in a while the combi of quails yolk and spinach is precisely balanced with the freshly steamed crab flesh, the Kormosky is a crunchy ball / truffle filled with creamy langoustine bisque that bursts through the “shell” as you bite on it, very clever and perfectly performed langouste doughnut, the toasted brioche (slightly scented with truffle oil) can be eaten on its own or used to dip into the eggshell to wipe off the remains of the dish excellent! 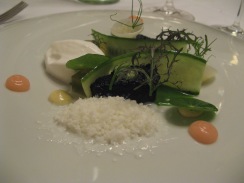 3. Sashimi of Amberjack
Amberjack (Intias) dusted in Nori seaweed, Ginger cream, Youzo aioli, a Jelly of honey and horseradish, yoghurt parfait, Horseradish Granita, and herbal vinaigrette.
The combination of the fresh sashimi and the perfect horseradish granite, is just right the other bits and bobs add to the presentation and the wider scope of flavours but is not essential.
Granita is a semi-frozen Sicilian rough sorbet of sorts, it is coarse, and has crystalline texture. It is made from water and fresh horseradish juice and grated flakes and maybe an added secret dairy ingredient, I guess…)
Amberjacks are voracious predators, which feed on squid, fish, and crustaceans in the mediterainian the smaller, lesser Amberjack (up to 5 Kg are more common than the Atlantic Greater Amberjack, one of the best fish for Sashimi in our waters.

4. Steak Tartar
Tartar of “skirt”/Onglet, Cognac, shallots radishes lightly cured Mediterranean anchovy Dashi cream and smoked egg yolk.
A delicate version of steak tartar from the diaphragm of the steer Though rough in texture, adding a nice sense of touch on the palate, it is smooth and precisely spiced with a nice balance between the elements (meat and fish), served with the smoked yolk in the “traditional tartar manner” with the Dashi opening the Umami touch on the tongue’s taste buds (nice touch).
Dashi is a simple broth or fish stock, shaved Katsuobushi and dried kelp – kombu – it forms the basis of many soups (such as miso) in Japanese cuisine. The element of umami, considered one of the five basic tastes is introduced into dashi from the use of katsuobushi, due to it’s especially high in sodium inosinate (MSG) content, the source of umami taste. 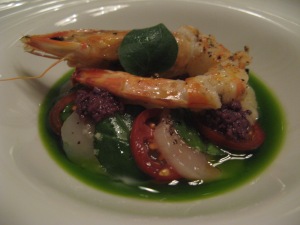 5. “Caprese sea”
Carpaccio of scallops, sliced “Tamar” Tomatoes, Basil leaves, on a bed of white eggplant cream, Kalamata Olive Tapenade, grilled crystal mediterainian shrimp, basil oil and fresh oregano
Caprese (salad in the style of the island of Capri) is a simple salad from the Italian region of Campania, made of sliced fresh buffalo mozzarella, tomatoes and basil, seasoned with salt, and olive oil.
Here the mozzarella is substituted very ingeniously with slices / Carpaccio of tender, sweet scallops, sandwiched between the traditional slices of fresh tomatoes and a basil leaf in a light green sauce reminding the parsley jus but without the Youzo , basil oil and fresh oregano add the Italian touch to the dish which is light and delicious in every bite, the eggplant cream is so delicate it adds mainly to the touch and dissolves in the final spicing which works well enough on its own. (Another thumbs up!) 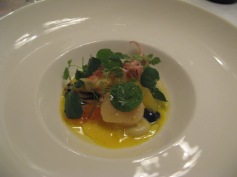 6. “Sea and Citrus”
Lobster, Calamari, scallops and mussels steamed in olive oil, Fennel cream, on a bed of organic rice (risotto) in youso, Liquorish coulis, confit of mandarins, orange slices mandarin and saffron vinaigrette
All seafood ingredients are prepared to perfection, with meticulous cooking time, a real whiff of citrus smell is combined into the flavour of the dish that brings out the best of both ingredients with an admirable balance between the seafood and the citrus, there is no overpowering of any product over the other. The clear orangy colour of the mandarins oranges and saffron sauce is so alluring and the light touch of the prep and presentation is compelling (envy me! You should!)
The next 7 dishes offered to us on this occasion in the next post very soon, why not extend the joy we had a little longer…
This is becoming a wonderful experience to be added to the list of the best of the rest (Thank god I have more than a few).
Until next week with humble thanks to Yonathan Dannon and the entire Catit team.