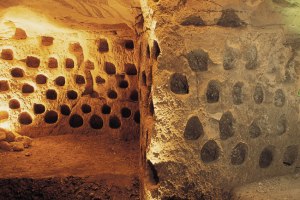 The origins and history of a meal – an Archeological excavation

We are sitting for lunch @ Dinner by Heston Blumenthal now already relaxed as we already had our starters, We ordered our champagne and wine for the meal, at the beginning, switching to the Hubert Lamy Saint-Aubin 1er Cru Les Frionnes 2009, after the “opening toast” took place, I like having 2 wines in 2 separate glasses on the table to “perform” my own personal pairing with the dishes served…

The Saint-Aubin Les Frionnes 2009 is a very attractive and elegant wine from small lots Les Frionnes on the north side of Rue des Frionnes, just outside the St. Aubin village; (you can “travel” along the vineyard with Google maps street view search for: Rue des Frionnes‎ 21190 Saint-Aubin, France), it seems the grapes are soaking in the sun throughout the day facing the southern slopes. The Lamy family has been working in the vineyards around Saint Aubin since c.1640.

The wine: Clean pale green colour. With notes of lemon zest and green apple peel, white flowers and traces of wet chalk. It has a light touch of wooden presence, it shows subtlety, delicacy and freshness as well as a nice aromatic persistence on the palate. An elegant wine, indeed with fine intensity and excellent freshness of citrus fruits on the long finish, very good balance, harmony and finesse, just right for our meal.

Udi “our” Vegetarian, opted for the – Braised Celery (c.1730) Parmesan, artichoke, walnuts & morels, was rich and tasty, it was perfectly laid down on the plate, I could not resist a tiny bite on the cucumber Jelly which was sublime.  (This dish was dug out from the book: The Complete Practical Cook;  A new system of the whole Art and Mastery of Cookery, by Charles Carter 1730 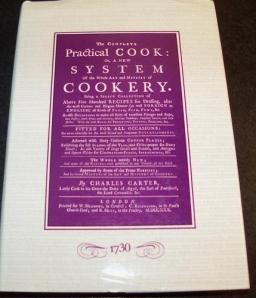 , BTW it is misprinted on the menu as “Charly” Cook, yes C. Carter was a cook for the Duke of Argyle. The Earl of Pontefrac , and the Lord Cornwallis), the book has phrases like: “…and send it up, in its jelly…”,  as an instruction to the cook in the kitchen “Downstairs” serving food to the dining TABLE “Upstairs” (You can read another of Carters books free on http://books.google.co.il/books?id=6YIEAAAAYAAJ&pg=PA58#v=onepage&q&f=false

I seems that Daphne our Fish eater, was stuck in  (1830), the same year as her starter but… with a dish by a different cook: Maria Eliza Rundell, she ordered the Roast Turbot (c.1830), Leaf chicory & cockle Ketchup. (from the 1830: “A new system of Domestic cookery by M.E. Rundell (A Lady)”, an extremely popular cookbook of its time, mainly in the western colonies. (Later editions were edited and rewritten by Mrs. E Birch.) 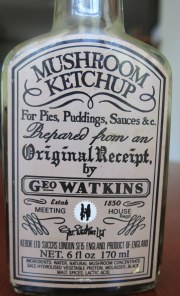 Ketchup is a late 17th century (around 1690), Chinese mix of pickled fish and spices called : kôe-chiap or kê-chiap (Chinese for: “the brine of pickled fish or shellfish”), from there to Malaysia and by the Brits to the west with the 1830  Mushroom Ketchup by Geo Watkins. The secret of many cooks in Victorian

times. It tastes halfway between soy sauce and Worcestershire Sauce and with a light scent and flavour of mushrooms, all the way to Mr. H.J.Heinz very own American tomatoes Ketchup of 1876.

A fine dish with Turbot roasted exactly inside and out and

cockle in their brine, ((ketchup) and Cichorium intybus (chicory)steamed leaves, the cultivated chicory is better known as Belgian Endive (the endives we know are white because the cultivated plant is deprived completely from sunlight (grown in the dark  underground or indoors), the green leaves used in this dish are from the wild chicory plant and are more delicate in their bitter taste than the Belgian type and less flavorsome than the brown, ground, dried chicory root used as a coffee substitute during WW2.

Spike Ordered the Powdered Duck Breast (c.1670) Smoked confit fennel & umbles, a reconstruction of a recipe by Hannah Woolley from The Queene-like closet or rich cabinet

1670-1672. The book was intended for Downstairs staff in stately homes, but does not really include any recipe even close to served dish, maybe the spirit of Ms. Woolley is there, and gave our team of chef  inspiration that should do:

Ladies, I do here present you (yet), that which sure will well content

A Queen-like Closet rich and brave, (Such) not many Ladies have:

Or Cabinet, in which doth set, Jems richer than in Karkanet;

(They) only Eies and Fancies please, these keep your Bodies in good ease;

They please the Taste, also the Eye; would I might be a stander by:

Yet rather I would wish to eat, since ’bout them I my Brains do beat:

And ’tis but reason you may say, if that I come within your way;

I sit here sad while you are merry, eating Dainties, drinking Perry;

But I’m content you should so feed, so I may have to serve my deed.

Yet again, unknowingly Lisa and I ordered the same dish: Spiced Pigeon (c.1780) Ale and Artichokes.

Neck of the woods (c.1555), Neck” had been used in English since around 1555 to describe a narrow strip of land, usually surrounded by water, based on its resemblance to the neck of an animal. But the Americans were the first to apply “neck” to a narrow stand of

woods, well in my neck of the woods pigeons are hard to get and I am a “sucker” for pigeons. Historically the practice of domesticating pigeon as livestock most likely came from the Middle East (my neck of the woods), squabs or pigeons have been consumed in the Middle East for centuries since around 350BC Hellenistic Period, in Ancient Egypt, Rome and then Medieval Europe. Doves are described as food in the Bible and were eaten by the Hebrews (that’s my guys…), still it is

quite rare to find good size or tasty pigeons round here, even quails the very bird that kept our forefathers from starving in the desert during the exodus of the Hebrews from Egypt to the promised Land of Israel is not available in shops anymore (The market forces of availability and demand brought the few farmers down…) 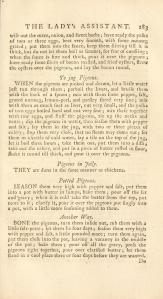 Squab is a young domestic pigeon; it formerly applied to all dove and pigeon species, such as the Wood Pigeon, the Mourning Dove, and the now-extinct Passenger Pigeon (not by hunting practices may I add). More recently, squab meat comes almost entirely from domesticated pigeons.

This recipe presumably comes from The: Lady’s assistant, and complete

system of cookery. By Charlotte Mason (c.1780). Read all about it online @ : http://archive.org/details/ladysassistantfo00masob

This lady (Mason), knows how to cook without a doubt and uses the finest of products to achieve her “creations” she relies upon French cooking tradition and uses the French definition when no English words are at her disposition. The pig looks and tastes so pinky, juicy and fresh due to a process they used initially at the Fat duck using an Enzyme Transglutaminase, this enzyme binds proteins together and shortens the cooking time required thus keeping our Pigeons breast all nice and juicy (in one word succulent). The reduction of Ale and pigeon stock is light and well seasoned (these tend to be slightly over salty most of the times BUT NOT HERE!!! There was a total consensus regarding the quality of the dish.

Now… the wines we had, you already read about. But I wanted to celebrate my 60th birthday with some “rare” wines I have collected through the years, to be opened on a special occasion, Like the Chateaux Mouton Rothchild 1970 (with the Mark Chagall Label), and a bottle of Anselme Selosse Substance Champagne, obviously I would not bring a wine to a restaurant without permission or a wine which is on their list of course, but when requesting that very permission at DINNER you get reply from the wrong people on the restaurant “Hierarchy”, these officials are bound by “restaurant policy” which would never in my mind get the chef’s or head sommelier approval they say NO (easy), I think that if the right people: HB or Ashley Palmer-Watts or the sommelier in charge they would say yes, after all as they write in their www site the idea of Dinner is: A formal meal, typically one in honour of a person or event.

Anyway (eat your heart out cause Lisa got me as a present form herself and Georgia (on my mind) a great wine bottle Chateaux Pavie 1970, somehow me paying a long debt on my side to Lisa was also “paid” in the shape of a Croft 1970 Port and I brought along (just in case the restaurant staff will show us the courtesy of good wishes and allow us to open Just one special bottle from my cellar Chateaux Mouton Rothchild also 1970 (3 great 1970’s on the table (well in a beg by the table on the floor), were left orphaned due to policy driven decisions, and me being too shy to ask), still if you ask me a bad decision but I am not the restaurant’s “policy maker” !!!!!!!! (I doubt if HB is even aware of the situation that even on special occasions with a wine which is NOT on the restaurant LIST which is a very nice and comprehensive wine list, (pity the internet version I was referred to is a short unsatisfactory list compared to the rich and diverse even easy to read list you get on the table), the restaurant stuff came out the losers as well because we always share good rare wine/s with other “understanding palates” (as this is our own personal joy). The wines we brought each other, the presents rouse our young sommelier’s envy, yet did not succumb to the “restaurant policy”…

We added Side dishes:  the amazing Mashed potatoes and the fresh Braised lettuce and peas again cooked to perfection JUST RIGHT!

Chef Ashley Palmer-Watts, likes to cook and knows the A-Z of cooking and easily masters a kitchen of this quality but I was left with a feeling that he is “afraid” (maybe by choice), to cross the boundaries of tailored “Haute cuisine” cooking into the realm of FUN. I guess being a “hotel Restaurant” or “Restaurant in a Hotel” has an effect not only on the envelope but also on the content of the Restaurant as a whole itself. On paper the idea to excavate ancient recipes that go as far back as the 14th century up to the beginning of the 20th century, is not only a great idea but shows a sincere and deep interest in food which appeals to me. When one cooks a lot, he stops getting interested in the recipe as an instruction guide to and tries to get to the idea behind the recipes, the other aspects of food such as history, philosophy, sociology, and get into the realm of cookery as ART.

We sank in to the remaining morsels of food in each other’s plates watching the cavalry guard heading back to the stables enjoying each others company while waiting to our deserts on the next post.