Another Year passed by and preparations for this almost “traditional” gathering at our house,  to celebrate the passing of one year with the hopes for the new year to come with “spoils” of food and wine are gathering momentum. 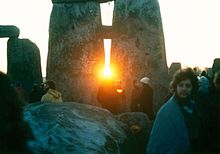 Last year’s dinner party/meal was recorded as one of my first posts on May 8th 2012: https://wine4soul.com/2012/05/08/a-new-years-eve-dinner-1/ , since then, I passed on my gastronomical memories and some culinary activities, some happy a few sad moments, all through the grapevine of wine and food encounters.

As the year passed towards the winter solstice, (the Southern solstice), which is the official first day of winter, on which the Sun appears at noon at its lowest altitude above the horizon in the Northern

Hemisphere, (the Sun is at its southernmost point in the sky), usually occurring on December 21 to 22 each year.

This year, is no ordinary December 21st It was feared as a day of doom, according to the Mayan calander. The ‘Mayan doomsday’, predicting the “end of the world”, a date when disasters of cataclysmic proportions were expected with fear by misinformed esoteric legend enthusiasts. In spite of the fact that real Mayan experts say and always said that the Mayan tradition as appeared on scrolls and engraved on stones, never actually predicted the end of the world on this date. The truth regarding the date, according to renowned Maya scholar Professor David Stuart, is that the day is indeed meaningful — but not in the

way people thought. The “end of the world Mayan prophecy” was totally misunderstood by “scientists” who visited Mayan temple sites and misread the inscriptions to make up stories about the Maya, but they did not read the signs correctly. When so called experts write about a prophecy in the name of the Maya, and say that the world will end in December 21st 2012. They made the Mayan elders angry! “The world will not end. It will be transformed to the new era”, says Mayan elder and priest Carlos Barrios. Indeed no major or unusual disaster was recorded around the “doomed date” , apart maybe from a culinary mini disaster on Dec. 30th around midnight when I attempted to test my pre dinner trial of Foie Gras Cromesquis, a dish I never tried before, I must say I have followed (almost to the letter…) chef Marc Meneau’s recipe. 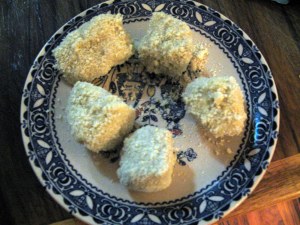 the Jelly looked good, with a great scent of black truffles, I have used my “knowledgeable contacts” and received complete instructions including secret hints from the grand masters but alas the final result was a total disaster. I doubt very much that the Mayan doomsday/disaster prophecy which was written sometimes between 2000 BC to AD 250, was in fact intended for my attempt in making Cromesquis?!  This is part of my planned first course of: triptych of Foie Gras that was chucked out (on time may I add) to the bin. I had enough time for a slight change in menu in preparations to my New Years Eve Dinner. The first course of Foie Gras suffered yet another blow when for the first time ever! My terrine of Foie Gras and pears in Calvados fell apart it did not hold together upon slicing, it will have to be reassembled in a different manner tomorrow the day of the meal. 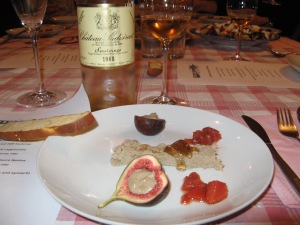 And so my triptych became a Solo Mousse of Foie Gras Figs & squares of preserved Quince, very much like the Musical Quartet of “Pepper-land” elders (in the Beatles Yellow Submarine movie) diminishing to a Solo upon the Bleu Meanies attack, but “young fred” fled to the rescue to bring HELP, this time in the shape of a bottle of Chateau Suduiraud 1988 Sauternes, that accompanied a Mousse concocted from the Foie Gras pieces, shallots, Croft 1970 Vintage Port a touch of cream de cassis and Armagnac XO  (after discarding the pears…), before it set I filled up some fig halves with a scoop of mousse the rest was left to set in a terrine dish for later, a sigh of relief which allowed me to get on with the rest of the meal. 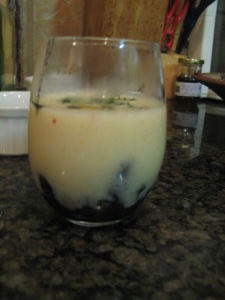 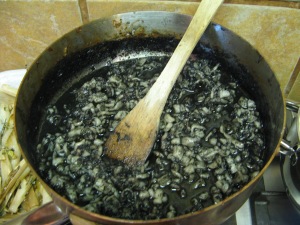 This is one a takeoff on Massimiliano Alajmo’s (The youngest 3 Michelin star Italian chef) “Cuttlefish in the black Cappuccino”, here as (Calamari in Sepia topped with potato cream soup).

Basically it is cubes of calamari fried and cooked in wine Vegetable broth and some cuttlefish ink at the bottom of the glass, topped by a hot cream of potato soup, and garnished on top.

The dish was accompanied by the precise yet down to earth champagne Larmandier-Bernier Tradition 1er Cru NV Champagne, the perfect wine for this salty inky dish it has finesse yet rustic enough to deal with the strong taste of sepia, it is a blend of 80% Chardonnay and 20% Pinot Noir with some reserved wines added. The dosage is minimal (5g/l ) allowing the ‘terroir’ to show off as pure and crisp as can be around the 1er Cru village of Vertus.on the Côte des Blancs. This wine accompanied the next dish of our meal as well. 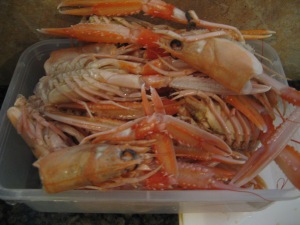 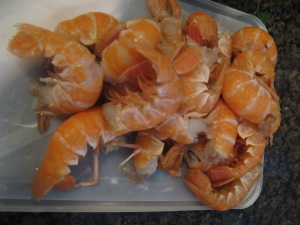 It came out light and airy with a delicate touch of Langoustine in the concentrated Sauce Nantua, and a morsel of langouste tail occasionally. The sauce was prepared from the Langoust heads and claws plus some local blue crabs and a bottle of Alsatian Riesling, tomatoes and stock vegetables. All “blitzed” in a food processor, sieved and reduced, than thickened with some Roux as a thickening agent for the sauce, and the base of the Soufflé half the liquids were the reduced sauce the other half milk… 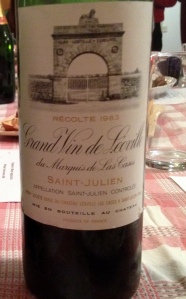 Enjoying every bite, without a doubt this was my favorite dish of the meal, a success!

We opened a bottle of Grand Vin de Leoville du Marquis de Las Casses 1983 and allowed it to breath in the glasses. It was delightful from the moment I gave it the first sniff and well into the cheese. It still retains its purplish  youthful hue, after all the wine is 30 years old and still drinking so

well, with all the fruit and acidity combined with rounded pleasant tannins in a glorious balance, to finish with aromas of freshly ground coffee adorned by scents of cigar box and violets.

Being a prominent winery in Saint-Julien, where the wines are full bodied and powerful but elegant. The list of the best properties around includes Chateau Léoville Barton, Ducru Beaucaillou, Gruaud Larose, Léoville Poyferré, Gloria and Talbot a very decent list and we are blessed by Chateau Leoville Las Casses. (Thank you my Dear Marquis). It was servrd with our main course: 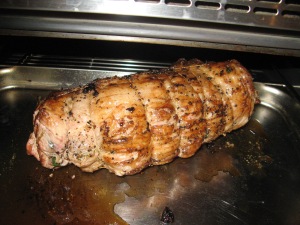 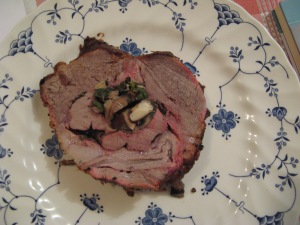 Gordon Ramsay style with minor changes related to taste (I prefer mint and thyme with lamb), the Lamb type and customs of the local butchers. I guess it would have been a bit on the dry side if the belly fat part was not incorporated in the cut. The stuffing held extremely well the next day to make a great cold sandwich. 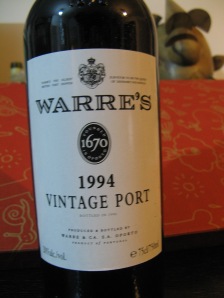 Osnat and I would like to Thank you, Dana (my young sister, for making yet again a Cream Caramel to perfection, smooth, seductive without a hint of the downfall of many caramel creams (tasting like scrambled eggs.

Many thanks to my friend Nir Mamon who assigned himself (in his words), as a Sous Chef and turned to be an invaluable (Extremely useful; indispensable) part, in keeping the meal a success, on track, on time throughout.

Wishing you a Very Happy New Year from the Very Holy Land.