A wine cellar is a storage room for bottled or barreled wine, in which some important factors for wine keeping such as temperature and humidity are maintained either naturally (underground) or by a climate control system.

Wine cellars protect wine bottles from potentially harmful external influences such as light, heat,dryness. Since wine is a beverage that can ultimately spoil, proper storage of wines, protects their quality and with certain wines will even improve their maturing stage adding tertiary aromas, flavors, and complexity as they continuously mature in the bottle.

Most wine bottles are tinted green because direct sunlight can react with the phenolic compounds (polyphenols) in wine and create “wine faults” mainly to color stability and in lowering their anti-oxidizing qualities. 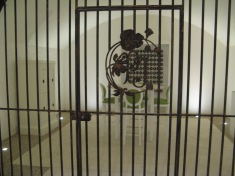 Most underground European Wine Cellars keep temperature of between  7–14 °C with variations developing gradually during the hotter months.  Lower Temperature will slow down the evolving / aging process of the wine, it keeps wines fresher and fruitier for a longer time.  French wine caves and English wine cellars naturally maintain 60-70% relative humidity. Low humidity can be a problem because it may cause organic corks to dry prematurely causing either seepage from the bottle through the cork or oxidation due to lack of tight seal.

So if you are about to build yourself a wine cellar it must be DARK, COLD & HUMID (basically a dungeon).

If you follow these rules most wine cellars will look the same. Some wine cellars are more impressive than others, the kind that get stuck in your mind for a very long time, for ever!

Caves or winery cellars Like the Ruinart famous deep chalk cellars (called the crayeres) which were excavated by the Romans around 50BC, (considered a French archeological monument), or some of the old “Grandes Maisons de Champagne” with kilometers upon kilometers of chalk cave/cellars at a constant 11º C, serve their purpose by providing the best conditions for wine making and winery storage during production and maturation, these are not the wine cellars our post is concerned with (yet a virtual tour of the Ruinart cellars is on their internet site is a “must visit: http://www.ruinart.com, check it out (there’s also a wonderful free, I pad app version).

My three most impressive wine cellars contain wines from many different makers and wine regions, they are in fact Grand Libraries of the great wines of the world (some more than others).

My choice of wine cellars, of those I have personally visited or was guided through with the owner or Chef de cave are:

La Tour D’argent cellar at the basement of the restaurant in 15 Quai de la Tournelle Paris, France, the Berry Bros. cellar, in 3 St. James’s street London and across the Ocean in the “Americas” The Graycliff Hotel, & Restaurant wine cellar in Nassau, Bahamas. These belong to large or well established groups or companies. All of these on the next “Post”, For now I prefer to start with two, more private cellars:

My own cellar, between us, I have a wine room (it used to be our bomb shelter which is obligatory to every house in Israel) but by definition because it is A. Underground and B. has more than 500 bottles it satisfies the wine cellar “definition”.

It had, has and will have GEMS of it’s own I know you like names so I will tell you what I do not have. You will not find a Petrus or any DRC’s, but you will find Great Bordeaux’s from amazing Vintage years 1970,79,82,83,85,86,88,90, and on… some single bottles cause I drink my wines, some full or half cases, Lovely Sauterns, spanning over almost 45 years (Yes I have D’yquem’s), but mainly Rieussec, and Suduiraut from the 70’s onwards, Excellent Vintage Ports from 1937 onwards (mainly super Vintages), some great Vouvrey, Vintage Champagnes from 1979 onwards, White and Red Bourgognes etc.  It is a live cellar wines flow in and out and it is always a great pleasure to open a great wine with a good company for a meal. Lets say my Cellar Book is much larger then the wines I have at any given moment, I have no regrets ONLY great memories!

The private cellar at the Galton House, just across the wall from Hampton Court Palace. The Palace of the Tudor Kings and queens, Built to House and feed the kings of England from around 1529-1760 including the Court of King Henry the 8th, with kitchens expected to provide meals for up to 600 people twice a day.

I had the privilege to visit my friend Lisa Galton at her dad’s house, her dad is by the way the legendry Ray Galton, scriptwriter and author (in collaboration with Alan Simpson) of Radio and TV shows such as Hancock’s Half Hour, (without a doubt amongst the finest examples of British comedy). But never mind that, for quite some time I have heard this guy, Ray, is into wine and has some fine collection of wines in his cellar. So when I finally got to visit them (with a very modest “offering” of the best available Israeli dessert wine).

I asked to see the wine cellar if possible, “be my guest, which cellar would you like to see?”  D’you have more than one? Yes one for whites and one for reds! Well I said: Both I guess… “Choose any bottle you like and let’s drink it…” I was lead down the stairs to a cellar quite large with 2 doors. One for the whites and then the Reds as you might have guessed, there was a musty smell in the air, the shelves around the walls were not full and in the center of the room a large heap of some wooden but mainly cardboard wine cases, partially rotting, hence the smell. Wines kept “pouring” in on a  yearly basis, from the merchants but there was no one to keep the order and spread them around in their rightful place, and so they were heaped in the center of the room. The lucky bottles on top were drunk occasionally, which left the older vintages right at the bottom. In the “white room” although most wines were from Bourgogne Premier and Grand Cru lots some have gone over their prime like the 1975 Bienvenue-Batard-Montrachet JJ Vincent, I have chosen out of curiosity although I knew it was going to be problematic, from a mediocre vintage but a Grand Cru lot which usually transcends the general quality of the Vintage Year.

The Batard-Montrachet portion of the wine’s name is a reference to the illegitimate (bastard) son of a local lord Chevalier-Montrachet the lot’s owner. Bienvenue means ‘welcome’ as the site is a direct entry point to the Grand Cru vineyards from Puligny village The wine has mineral qualities, With the limestone reflecting heat and light back up to the vine the grapes reach optimal phenolic ripeness, making it the white wine with Red wine qualities making for slightly heavier, richer wines. It is lacking the more elegant fine qualities of wines from the Great Le Montrachet.  It was slightly over oxidized still with firm traces of minerality and black truffle aromas it was a perfect example to a wine that was great in it’s times and was fading away lacking the fruit and acidity leaving all the secondary and tertiary aromas locked in the bottle..

The Red room was at a better state since most wines came in wooden cases There you had some of the best of the rest from Bordeaux , the likes of Petrus Pavie etc. and some lesser known premier Crus reds from Bourgogne, all of which I yearned to taste but did not dare!

Now 10 years after I am told by Lisa: “We nearly finished all the whites, some good reds left..” I guess it’s time for a revisit…

You will be posted re: Galton House revisited in due course Till than