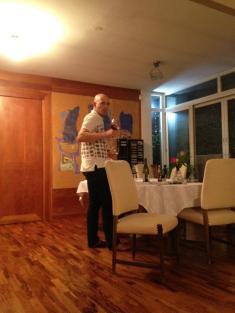 …In the mean time our “sommelier” Yair, opened the two reds on offer:
Vosne- Romanee 1 Cru, Les Suchots Domaine Confuron-Cotetidot 2006
And the 2006 Charmes-Chambertin Tres Vieilles Vignes Grand Cru, Domaine Joseph Roty, these can breath for the time being…at least until the lamb is properly roasted… 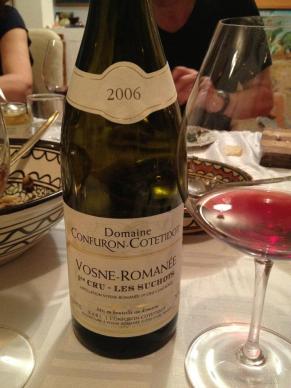 The Vosne Romanee from Domaine J. Confuron Cotetidot , is a highly suitable wine for the occasion since the Confuron family are an old winegrowers family, (since the seventeenth century), they even have a strain of Pinot Noir named after them – Pinot Confuron. The domaine has some Grands Crus vineyards and “our” Premier Cru vineyard of Les Suchots, certainly one of the very top domaines of the Côte de Nuits. The tradition of whole-bunch fermentation is still practiced, producing this extra deep scent of berries plums and ripe dark red fruits. One of the strengths of Confuron Cotetidot wines is their ability to age and develop, (hence the long decanting time). I guess our state of mind will allow them to be approachable in the medium term as well. 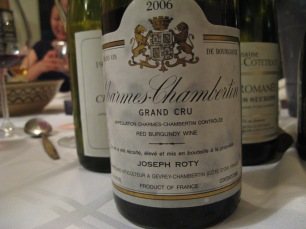 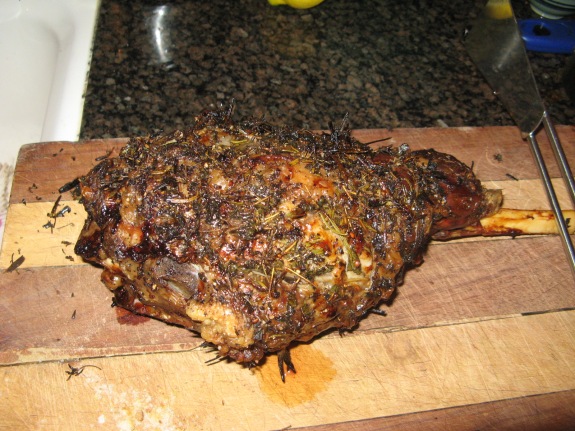 Our wines are slowly evolving in their decanters and the leg of lamb properly rested, it’s juices evenly spread within, were “calling” us back to the table, Etienne following me back to the kitchen, as I steamed the tender spinach, cut the oven baked shimeji mushrooms off their stem, and the roast potatoes, all in their serving dishes and off to the table where our first red the Vosne Romane , Les Suchots 2006, was already poured to glasses, 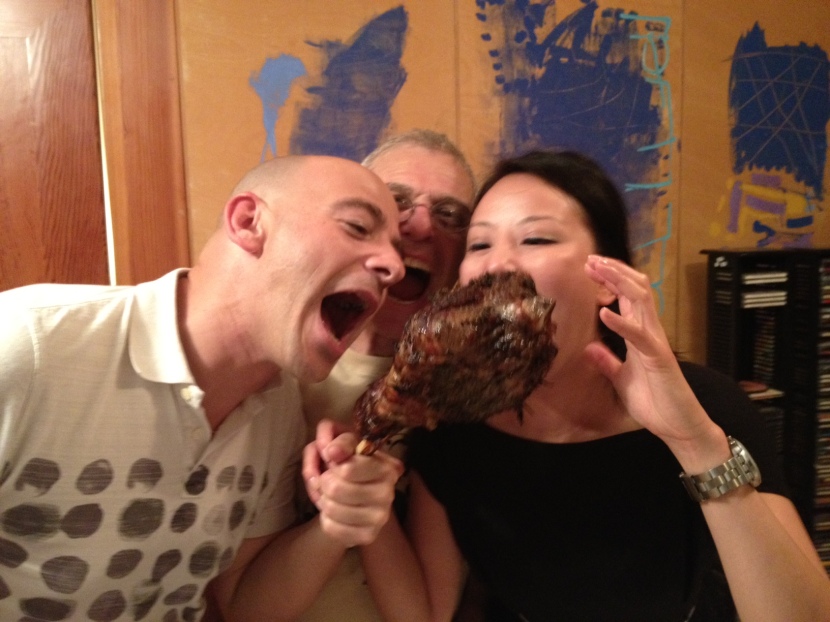 Etienne insisted on the joint being carved at the table, not before he orchestrated several photos with the roasted joint still intact (as you can see), 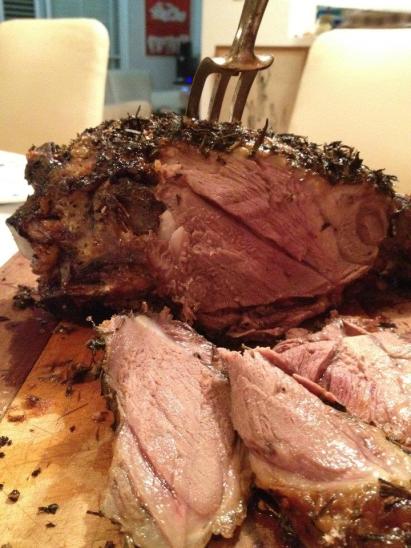 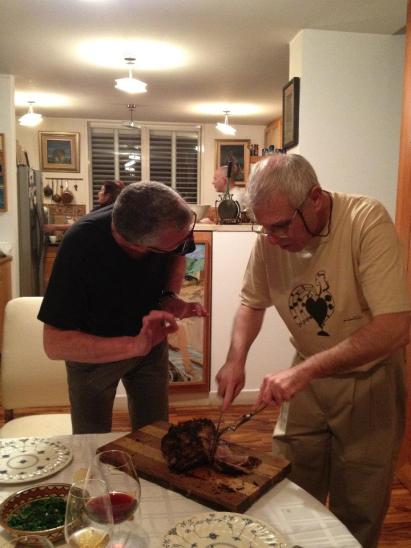 he watched over me, as I carved the joint of meat, nice and juicy, steaming off the aroma of thyme, rosemary, mint, and a delicate touch of garlic, just as intended (it does not always come out like that, lucky again…) 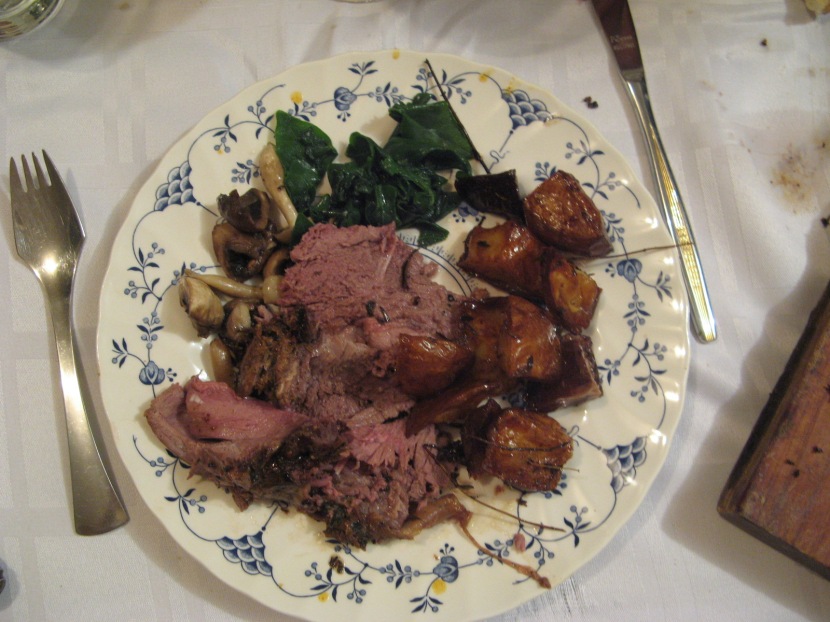 There was lot of everything to be had and we dug into it, perfectly paired with the wines. The one that followed, the: Charmes. Chambertin Grand Cru, Joseph Roty 2006, was equally well paired with the dish, and so we took our time, enjoying our main course commenting on the wines and food and Etienne’s stories of his “holy land” impressions, he really enjoyed visiting Jerusalem and the Galilee following historical footsteps of 3000 Years of human religious history, than recalling his recent visit to Beirut Lebanon, his joy of meeting old friends in Beirut, and I was envious, political boundaries forbid me from visiting Lebanon, the city I heard about from my father who studied there in the mid 1940’s describing in details the amazing pastry sweets, the cool Booza (a local ice cream with Mastic and Salep, which provides it with the ability to resist melting at the speed that other regular ice creams are affected by, thus withstanding the local heat of the summer) it has an elastic chewing gum quality (extra special touch on the tongue and palate, Devine!!) how would I know? They have a few places in Jaffa, Galilee and other Arab neighbourhood who still make them, with a varying degree of success. I read that In the Old City of Damascus, there is a shop called  Bakdash,  بكداش‎ that is famous throughout the Arab world for its ice cream and gum Arabic, used to be a popular attraction for tourists, who knows if it still exists, after all we live in a turbulent neighbourhood…, I would like to think it is still there, after all places of tradition, know how, secret recipes and excellence should last forever (very much like Hugel family wines.)

Etienne was not talking specifically about his own wines, he spoke of all the wines upon their specific merit, which is commendable, after all we all know people who can’t stop talking about themselves or their own wine which tends to be tedious sometimes but not in this case. 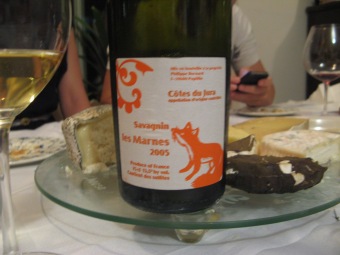 We cleared the table off the empty main course dishes ready to receive our “cheese and biscuits”.
A very special wine accompanied our cheese Philippe Bornard -“Les Marnes” Cotes Du Jura 2005 a wine from the village of Pupillin near Arbois and the Swiss border, this is the “home” of “vin Jaune” also made from 100% Savagnin grape, It does not have the same deep dry sherry quality of proper vin jaune, as it is not left to oxidise under a film of yeast, known as the voile, on the wine’s surface for almost six years but rather undergoes a different 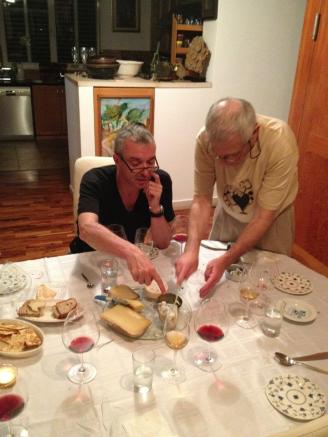 process, at first the wine begins a long, slow maceration in fiberglass container, then moved to large older oak barrels for maturation, which lasts about one year. Wines are of two appellations: Côtes du Jura as is our wine, and Arbois-Pupillin, and reflect beautifully the terroir of the Jura. This is a wine that shows a masterful balance between aromatic richness and minerality. All the meticulous work and emotion of Philippe Bornard is revealed in this great wine. The vinification under the yeasts – “voile”, gives birth to a Savagnin that mixes roast hazelnut and walnut yeasty aromas with white fruit, superb bottle.Bullseye choice for the cheeses (Thanks Judy…) 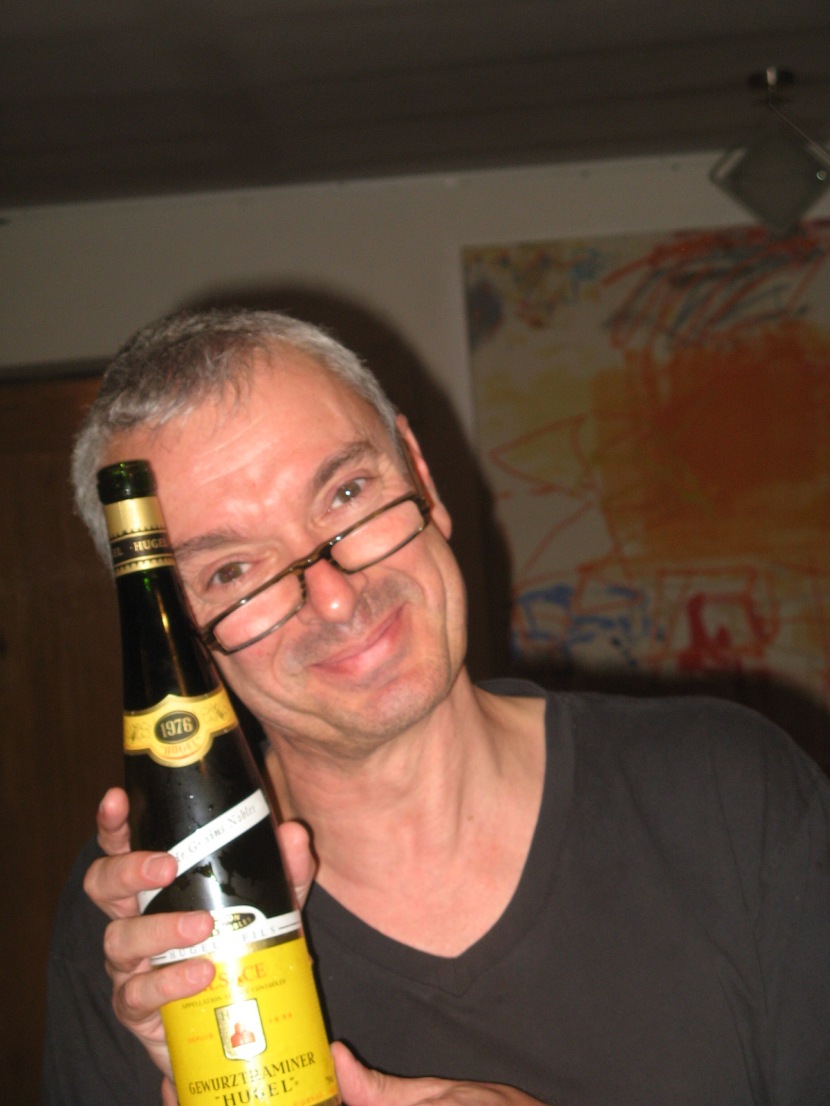 Halfway through Etienne could not resist the temptation of pouring the Nectar of the evening – Hugel & Fils Gewurztraminer Selection de Grains Nobles, 1976, an amazingly perfumed and aromatic wine, scent of botrytis engulfs you as you swirl the wine in the glass white peach mango and passion fruit juice, shooting out of the glass enchanting the palate with it’s smoothness, light fruity sweetness emitting the scent from within upwards sublime! (since 1976 the next vintage this wine was produced was 1988) What a delight that went so well with our cheese and dessert : Tart Tatin of Pears and Ginger, this is a take off on Marco Pierre white award winning dessert from the mid 1990’s with an added twist of ginger julienne and slivers to fit Alsacien grape verities, and it did .. at one stage Etienne “grabbed” the serving plate and “devoured” the tart from the large plate to everyones delight. 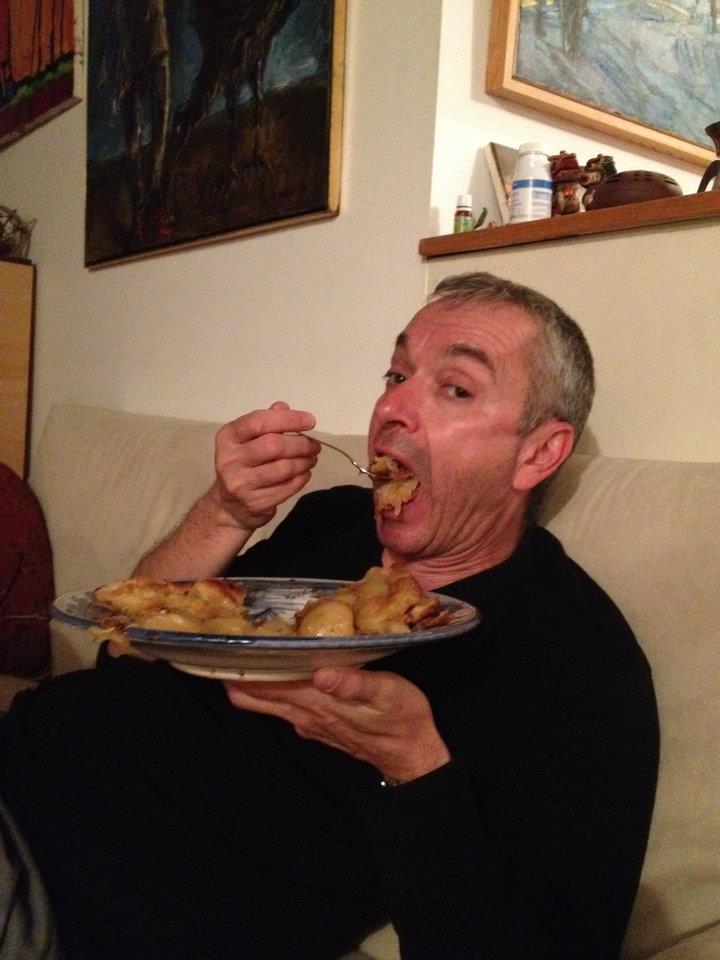 The incident that followed before coffee and petit fours were served, is private between us five and will remain between us four (now that Etienne has taken the secret to his grave, and we will all in turn…) all I can tell you about it is Etienne comment: Ai Yai Yai…!!! 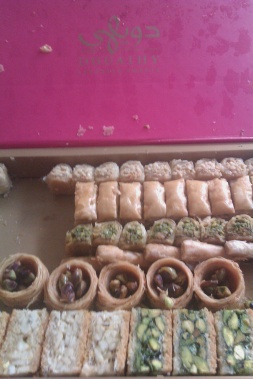 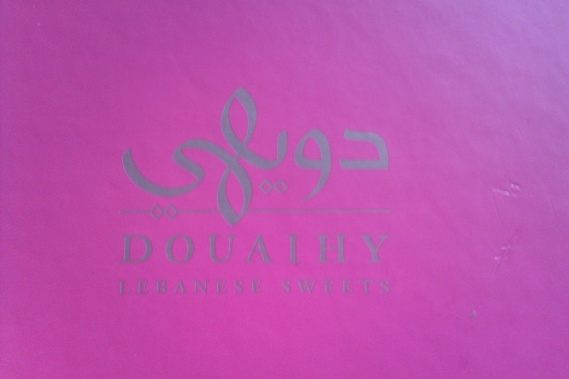 The next morning after all the sweat, tears of laughter and blood of course…when everyone was gone I opened the Pink Box of delights, and what a sweet surprise!! it was a box of the best ever tiny Baklava pastries from Douaihy – Lebanese Sweets, full of goodies with a taste that still lingers on the tip of my tongue, excellence in mid eastern pastry making, my favourite sweet!! from the most excellent but “forbidden source” the city of Beirut, and my fathers stories all came into context, imagine just one hour north of the border!!! a place I would visit every weekend if only possible.
My friend Etienne is gone but not the memories of this warm night in May 2012, this was my first and last meeting with him in person we kept in touch and planned to meet later this year but alas it was not to be.
Farewell my dear friend, these fragile tastes and smells will endure, more persistent, more faithful, and will remain poised a long time, like our souls, remembering, waiting, hoping, amid the ruins of all the rest.