One of my devoted “followers” is Daphne, and she has her birthday each year on 31st of March. (Yes I invite my regular “followers” to dine on their birthdays, it is a means to increase the volume of readers of my blog: WINE4SOUL.com, a PR stunt and it works) [press play to hear music].

Her choice was; dinner at Yauatcha Soho. Not for the first time may I add and the joy, as always is complete. YAUATCHA is basically a Dim Sum joint at the edge of Soho London. But… there’s dim sum and other “touches of hearts”. This is dim sum at its best with other Chinese nibbles on the side. See menu: http://www.yauatcha.com/soho/files/2011/07/Yau_ALC_271112_no-prices.pdf It serves some of London’s best and most exciting Cantonese food.

Dim sum 点心 (meaning in Chinese: touch the heart) is (as you all know) a style of Cantonese food prepared as bite-sized or 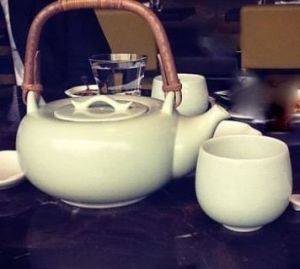 individual portions of food, served either steamed in small steamer baskets or fried, grilled, or baked bite size gems . Eating dim sum at a restaurant is usually known in Cantonese as going to “drink tea” (yum cha, 飲茶), as tea always was typically served with dim sum.
Dim sum has its roots in small establishments that serviced travelers on the ancient Cantonese traveling routes. Those small tea houses, served at first as stations for travelers needing a rest and have a cup o’ tea. Teahouses were established along the roadside. Travelers, merchants and farmers, would go to teahouses for a relaxing afternoon of tea. No food was served as it was considered “inappropriate” to combine tea with food, for dietary reasons. While dim sum was originally not a main meal, only a sort of snack, meant to “touch the heart”, (very much like “Spanish Tapas” traditionally served with Sherry, rather than tea), it is now one of the pillars of Cantonese culinary culture.
The unique culinary art of dim sum was transformed from “yum cha” a relaxing tea break to an exciting dining experience. The traditional dim sum restaurant typically serves dim sum until mid-afternoon. However, in modern society it has become more common for restaurants to serve dim sum at dinner time, Yauatcha follows this trend. In Hong Kong, and in most cities and towns in Guangdong province, many restaurants start serving dim sum as early as five in the morning. It is a tradition for the elderly to gather and eat dim sum after morning Tai Chi exercises.
The characteristics of the elaborate cooking methods of Chinese imperial cuisine, of strict selection of material, which are often extremely expensive, rare, or complicated in preparation, visual presentation as a crucial aspect, and significance of color and shape of the dish arrangement were adopted by Dim sum “masters” who transformed the dishes into Art on a plate.
Dim sum by the way, should not automatically be assumed to be healthy as it contains fatty dishes and ingredients that should be balanced with lighter vegetable dishes.
At Yauatcha, as they testify themselves, “you can sample the delights that first made the restaurant famous when Alan Yau opened it in 2004: top-quality dim sum that’s served day and night. (Yau has long since released control of the business), but standards remain high. Yauatcha is a modern reinterpretation of the old Chinese teahouse. Designed by Christian Liaigre, the restaurant’s open-plan layout and visible kitchen energizes the entire space, engaging both the outside street scene and Yauatcha’s customers. Yauatcha received a 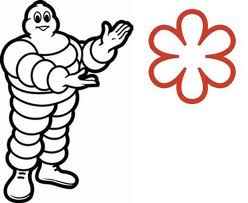 Michelin star within a year of its opening and retained it to date”.
A limited number of restaurants are chosen for the MICHELIN Guides and all aspire to be nominated for entering their “star system” but earning a star is one of the highest honors in the industry. Although The only known criteria on which they judge a restaurant for a Michelin star are: Quality of the products, Mastery of flavour and cooking, techniques, The “personality” of Chef in his cuisine, Value for money, and Consistency between visits, which are vigorously kept at Yauatcha, it is usually more than just that… that enters the list of considerations and very few bustling, noisy, multi service packed restaurants are awarded the Honor of the restaurant industry, Yauatcha, is rightly awarded the aspired accolade.

One star indicates a very good restaurant in its category, offering cuisine prepared to a consistently high standard. (A good place to stop on your journey, as defined by the guide). It is worth a visit even out of your journey, I’ve been doing it since the day it was opened.
On this visit we had a selection of the following Dim Sum, and other dishes accompanied by 2010 L’oeuvre de Perraud,Domaine Perraud Mâcon-Villages not a great wine by any standard but perfect for the meal ahead, fresh multilayered with green apple and touches of tropical notes, a light and easy fun wine with no apparent faults.
We had:

Blue swimmer crab shui mai with pork was an interesting combination of white crab meat and minced pork.
Steamed vegetable dumpling – so well performed and presented the photo says it all
King crab dumpling – simply delicious
Prawn and bean-curd cheung fun an old favorite of mine and one of the ” spécialité de la maison” 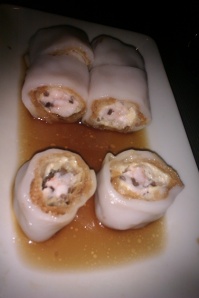 the perfect balance of oral touch sensation the bite starts at the outer smooth jelly, followed by crispy lining of bean-curd that crunches between your teeth as you get to bite the springy fresh prawn exquisite!
Three style mushroom cheung fun another “house specialty” the gelatinous “flat rice noodle” wraps precisely spiced and deliciously scented mushroom filling.

Of course we could not resist the fried Spicy soft shell crab so we ordered 2 and could have devoured at least 2 more between the 4 of us. The chilly spiced roast almonds with fried and fresh curry leaves and a well fried soft shell crab “swimming” in a yellowish saffron colour, a delight with every bite.
Soft-shell crab is a term for crabs which have recently molted their old exoskeleton and are still soft, most crabs molt their shell and are a delicacy at this precarious stage of their cycle. 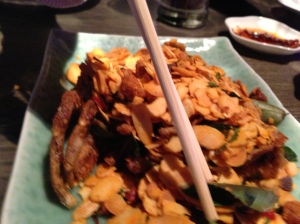 Jasmine tea smoked ribs – so tender and well seasoned to “die for”
Crispy aromatic duck – this is almost a fetish of mine to sample crispy aromatic duck (a most common dish) in every chineese mealand this one tops them all all the fat turned to crunchy crisp deliciously spiced and scented, I like it here, I can skip the whole self wrapping part and just eat it on it’s own.
For vegetables Spicy aubergine, Sato bean, okra and French bean – the wide array of tastes enhanced by the Hedonistic peculiar 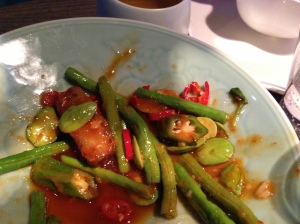 taste of the Sato bean is sensually perfect.

Sato Bean is a plant of the genus Parkia in the family Fabaceae. It has almonds shape, long, flat edible beans with bright green colour  which have a rather peculiar but Hedonistic smell, similar (but stronger) to the Shiitake or even rotting mushrooms. A popular culinary ingredient in most south Asian countries, mainly: Indonesia, Malaysia, Singapore, Laos, southern Thailand, Burma, and northeastern India.
Egg white fried rice with dried scallop and asparagus – my favorite rice here
We finished with a well brewed cup of tea and a complete balance of body and mind was achieved yet again.
The service (as always), was kind supportive informative and efficient.